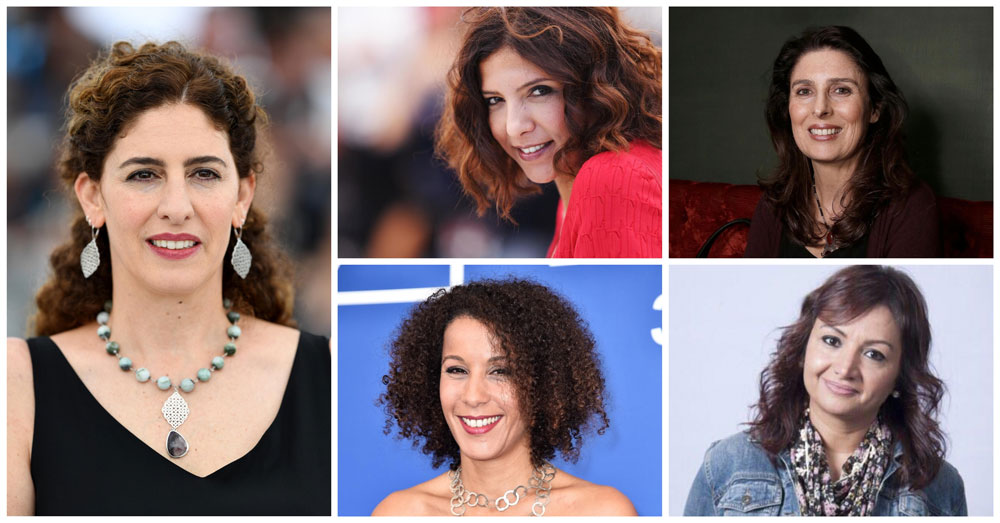 In the US, only about 5 per cent of directors are women and 12 per cent in Europe. In Palestine and Lebanon, that figure is about 50 percent.

Five of the Arab world’s best filmmakers – Annemarie Jacir, Mai Masri, Hala Khalil, Kaouther Ben Hania, and Sofia Djama – appeared on a panel at the 40th Cairo International Film Festival to discuss the way Arab female filmmakers are at an advantage versus their western counterparts.

Wajib director Jacir set the tone for the lively debate when she questioned the topic ofdiscussion on the screen behind the five speakers, which was Wonder Women: How Female Filmmakers in the Arab World Proved to be More Sustainable in International Film Festival Circuits. “I’m really happy that there is such a big audience for this panel discussion,” Jacir said, but followed that statement by saying: “I don’t agree with the statement and I don’t really understand it.”

In the Cairo International Film Festival programme, this confusing statement is made clearer to include the claim that Arab women directors are outshining men in cinema: “They [Arab female filmmakers] seem to be more successful at maintaining their presence and seeing their projects through, more than their male counterparts.”

'We are not successful because we are women'

Jacir shot down this statement. too. “I don’t think it’s true at all," she said. "We [Arab women] are a tiny group. The title also suggests that a marker of success is that your film goes to one of these festivals, which I also have an issue with.

“Also, it makes me feel that there is a suggestion that we are successful because we are women and not because of our work.”

It’s a case of being damned if you do and damned if you don’t for female filmmakers in the region. “There is this thing that you are not successful because you are a woman because of all the obstacles on the one hand and then on the other that you are successful because you are a woman,” Jacir said. “It’s never about the fact that we are just filmmakers trying to make work and we should be judged on our work only.”

On their work alone, they are some of the best filmmakers, regardless of gender, in the Arab world. Algerian director Djama’s debut film The Blessed had its premiere at the 2017 Venice Film Festival. Jacir’s films Salt of this Sea, When I Saw You and Wajib have played at Berlin, Cannes and Locarno. Hania’s Beauty and the Dogs was an official selection of the Cannes Film Festival. When documentarian Masri made her first feature film, 3000 Nights, in 2015, it went on to play in more than 80 film festivals.

Egyptian director Khalil, who has travelled the world extensively with her short films and three feature films, concurred with Jacir’s argument. “I’m happy we are having this panel, on this topic, but I hope that we will not have need for this kind of push in the future,” she said.

Khalil argued that it was not in the comparing of the success of women with men that made the panel necessary, but that Arab women filmmakers needed to speak up so that they can be role models for other women who want to enter the industry, yet continue to face social, cultural and economic barriers.

“We need to change the way we educate girls in Arab families,” Khalil said. “We bring up women not to be strong and independent, but to be a good wife and mother.”

Hania argued that this type of upbringing doesn’t lend itself to being a director because of the skills needed to do the job successfully. “I remember when I made my first short movie, it was very complicated because I was raised to want to please everybody. But if you are trying to please everybody on a film set, then you have no movie. So I had to figure out a way to do it, which meant becoming tougher, acting like a figure of the patriarchal dictator.”

Masri explained how the success of Arab women may seem remarkable, but that is because the rest of the world has a huge problem, especially Hollywood and Europe. In the US, she said that only about 5 per cent of directors were women, while the figure was a paltry 12 per cent in Europe. In contrast, in Palestine and Lebanon, the figure was almost 50 percent.

It was Jacir’s opinion that the more even gender balance of directors seen in Palestine, Jordan, Lebanon, Algeria and Tunisia was a consequence of these industries being relatively new compared with India, Egypt, the US and Europe.

These countries had developed ingrained patriarchal prejudices for decades, which meant, she said, that she had less of a battle to take charge of a film and an advantage over Egyptian fellow panellist Khalil.

“That’s not to say we don’t have problems with patriarchy," Jacir explained. “And there are a whole lot of other issues we have to deal with, but in terms of making films, maybe we have an advantage in that way.”

Djama added that in France the prejudice is such that it’s almost accepted that women should only do certain jobs on movies, such as editor and script supervising, whereas men are naturally predisposed to be cinematographers, directors and part of the technical crew.

In contrast, in Algeria, where only a handful of films are made each year, none of these institutionalised hierarchies exist. Consequently, there is no ingrained prejudice against women being directors, so they are able to flourish.

Supporting this assertion, Jacir provided an anecdote from her 2008 debut feature, Salt of This Sea. “When we were about to shoot, my French producers said: ‘We are worried that as you are a young woman and you have a team under you, whether the Arab men on the crew are going to be able to respect you as a director?’ What was interesting was that during the production and the shooting I had no problem with the Arab men, but with the French technicians who were all older white men, they were the ones who had a problem with the young woman director.”